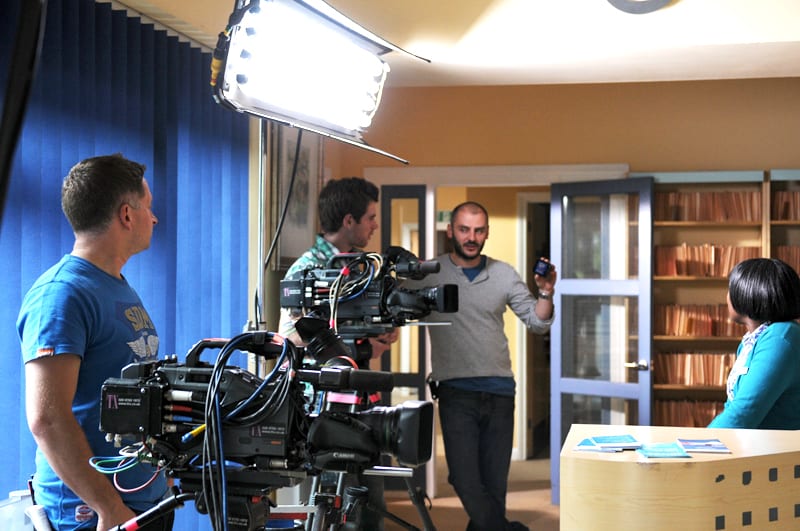 T’other week I had a delicious 5:30am start to get onto the set of BBC’s Doctors for 8 to shadow DOP, Ted Ames.

I met Ted whilst working on Matt Chambers’ (Dr. Daniel Granger, Doctors) short film, For the Love of Eli.

He invited me on set of Doctors to observe the logistics, creative and technical elements behind the low budget TV drama. The first thing that staggered me was the speed of shooting. Blocking and rehearsals were done in a matter of minutes before lighting was rigged up and a scene filmed.

It was my first time inside a purpose built studio set with more lights than people and removable panel walls making shooting in seemingly small rooms a whole lot easier. The aim of my visit was to learn as much as I could about the kit and processes in place on a busy commercial set and I made the most of my time talking to Ted, the camera crew and the sparks to learn what I could. 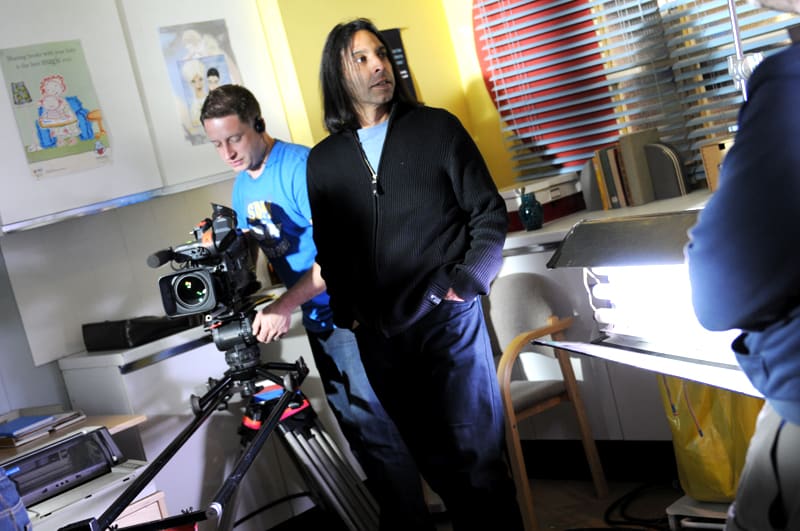 The lighting setups were very straight forward and mainly involved the deployment of 350 and 650 watt tungsten balanced Arri lights with a daylight gel alongside a Kino or two. Below are a few quick reference shots to the setup of one particular scene shot in Dr Carmichael’s office. 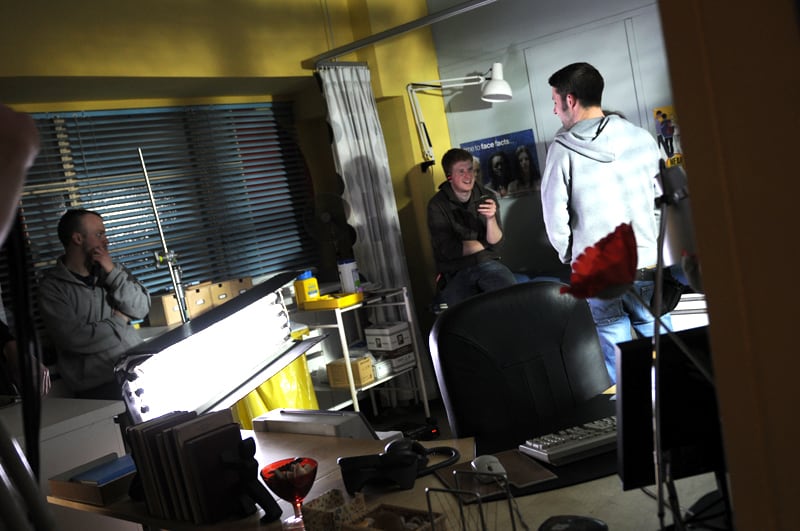 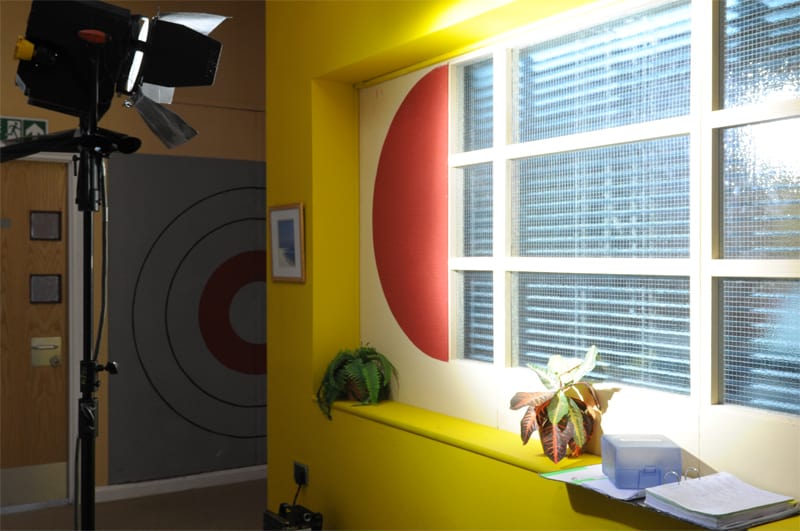 As you can see, the interior is lit by a Kino about a metre away from where the cast would be (I was not permitted to photograph the artistes), and an Arri shooting through the glass window. Additional lights were setup around the office to illuminate any exterior areas that might make it into shot through the open door. This was primarily done with a few Arri’s bouncing the light to keep it soft and unobtrusive to the key scene.

What I loved about the studio was the fact that there were so many lights that nothing needed to be taken down between scene changes – additional lights were just brought in and the others were left standing. This saved so much time whereas on a set with more limited equipment, everything would have to be constantly set-up, taken down, moved and re-setup again and again. I would love to have those kinds of resources on projects – productivity would be through the roof and my creative ideas would know no bounds! 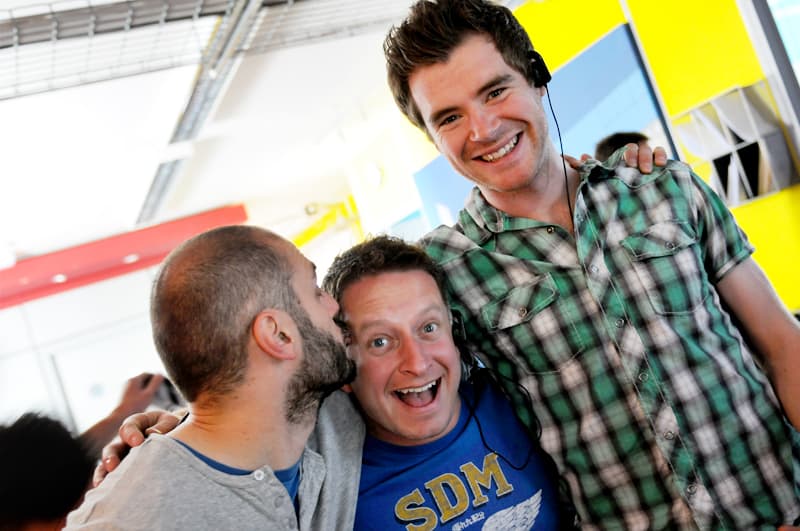 As well as the technical side of things, I also quizzed the crew on practical things like scheduling, expectations of product and budget on this kind of production. Being a perfectionist I hate releasing anything less than the best I can achieve (and then some) which although is great for maintaining high production values, can be detrimental to productions working to a tight schedule and small budget. As Scott put it: it’s better to hand over a completed script’s worth of work with a few small issues than a half-finished script of perfection – at least then you are keeping the client happy if not yourself! 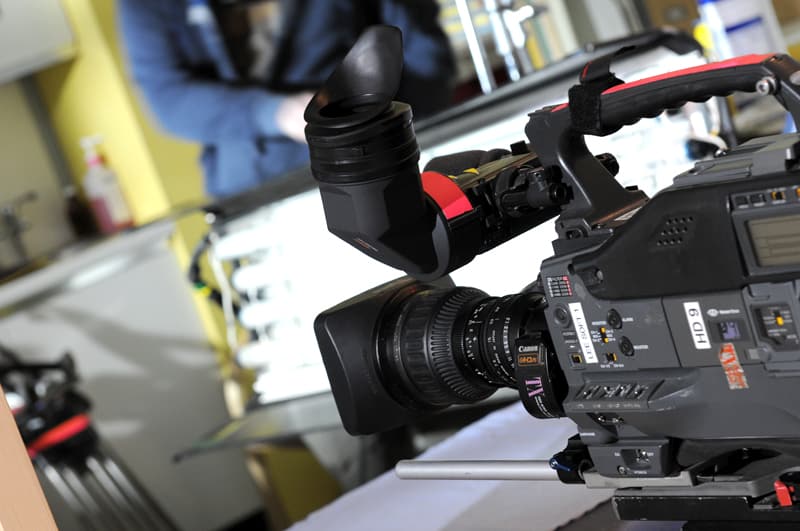 All in all it was a good day and I feel like I learned a lot, particularly in regards to the logistical side of things. My thanks go to Ted for inviting me along and putting up with my endless questions and to the crew for a good laugh! I hope to have an opportunity to work with them again in the future!